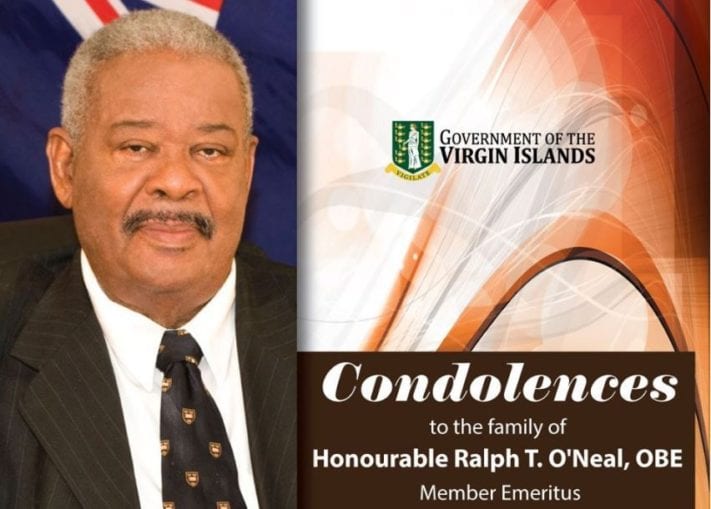 A state funeral is being planned for Wednesday, December 11 to honour the first Premier of the Virgin Islands Honourable Ralph T. O’Neal, OBE Member Emeritus.

This will be followed by the state funeral on Wednesday, December 11 at the Multipurpose Sports Complex.

Additional details regarding the arrangements for the state funeral will be provided in subsequent communications.

The family of Honourable Ralph T. O’Neal, OBE Member Emeritus informed the Government of the Virgin Islands of his passing on November 11. He was 85 years old.

A Coordination Committee, chaired by the Speaker of the House of Assembly Honourable Julian Willock, are planning the occasion in close consultation with the family and Premier and Minister of Finance, Honourable Andrew A. Fahie

Honourable O’Neal was the longest-serving elected official in the history of the Territory of the Virgin Islands. He served in the House of Assembly and Legislative Council for almost forty (40) years.

On July 6, 2015, the House of Assembly honoured Honourable O’Neal by passing a Resolution bestowing upon him Member Emeritus status.

Honourable O’Neal was born on Virgin Gorda and represented the Ninth District for thirty-six (36) consecutive years before retiring from his political life in 2015. He has contributed significantly to the development of Virgin Gorda and Anegada and the entire wider Virgin Islands. He has served this Territory in many different capacities including as a teacher, an administrator and political leader.

The Government of the Virgin Islands joins the family and friends of the late Honourable Ralph T. O’Neal, OBE Member Emeritus  in mourning the passing of this Virgin Islands Patriot.

Statement Regarding the Re-Entry of Work Permit and Work Exemption Holders Statement by Minister for Health and Social Development with COVID-19 Update on Case No. 9 and New Legislation Statement by Premier Fahie – It Is August 1, 2020 – Happy Emancipation Day BVI Emancipation Celebrations To Be Observed Virtually And Physically Premier Andrew A. Fahie – Statement On Passing Of Former Prime Minister Of Barbados
© BVI London Office. All rights reserved.