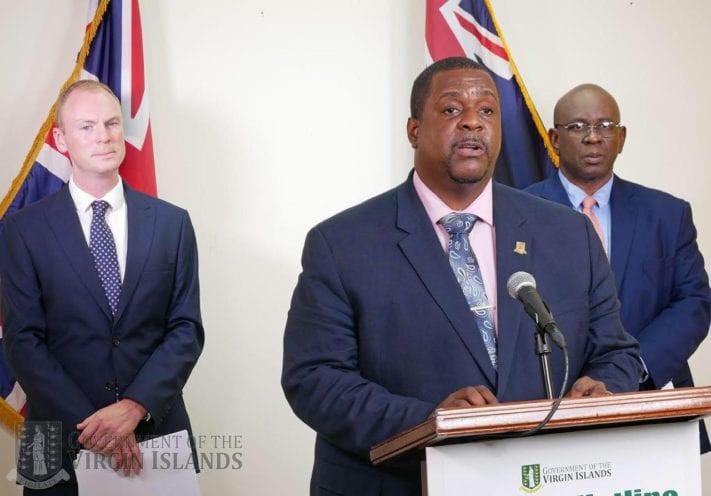 Premier and Minister of Finance Honourable Andrew Fahie announced today that a new curfew Order will be put in place from 6:01 a.m. on Thursday, April 16 to Thursday, April 30.

The Premier while announcing that the Cabinet of the Virgin Islands has endorsed phase one of the Phased Internal and Restricted Borders Reopening Plan, said that there will be no difference in how the Territory will be operating under this current Order on April 16 and 17. He said on Saturday, April 18, approved businesses will be allowed to clear supplies at Port Purcell, Tortola and St. Thomas Bay, Virgin Gorda.

The Premier stated that businesses approved by Cabinet as critical or key are permitted to carry out business but must put in place the necessary in-store sanitising and other measures prior to reopening.

The Premier said that Cabinet has agreed that a new nighttime curfew will be imposed from 7:00 p.m. to 6:00 a.m. daily from April 19 to June 1. He said seniors and essential workers can access critical businesses for essential supplies on April 19.

The Premier added that residents of Anegeda will be permitted to travel and access services in the Road Town business district from April 20 to 23.

The Territory’s leader said the borders will remain closed. “When the borders do open up in phase two, only persons deemed to belong to the Territory and persons with residents status will be allowed entry over the next three months,” he said.

Premier Fahie added that during this time, only pre-approved passenger information in advance of seven (7) days will be facilitated and allowed entry at the Terrance B. Lettsome International Airport.

The Government of the Virgin Islands continues to implement precautionary measures to mitigate the spread of COVID-19 in the BVI.