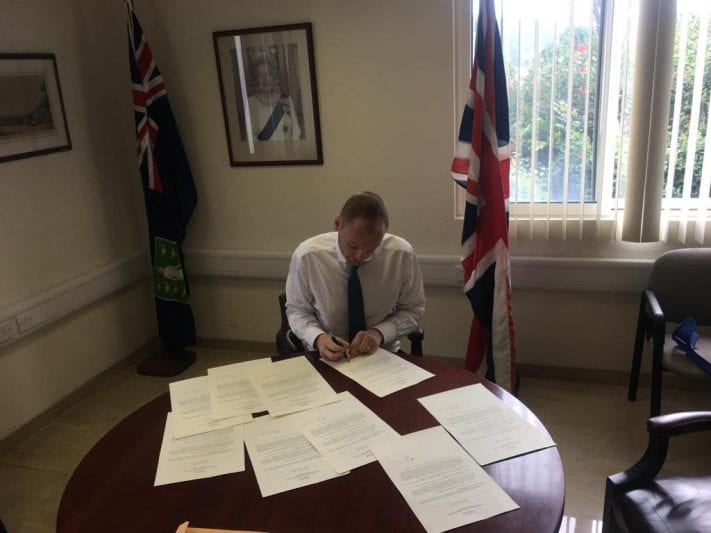 His Excellency the Governor Mr. Augustus J. U. Jaspert issued the Writs of Election on January 31 authorising the next steps for the 2019 General Election.

The writs are formal instructions issued by the Governor in accordance with the Elections Act. According to the writs, the Governor has appointed Monday, February 25 as Polling Day and Thursday, February 14 as Nomination Day.

The writs instruct the appointed Returning Offices to carry out their functions on Nomination Day and Polling Day on the given dates. They also instruct the officers to report the election results to the Governor no later than February 26.

As outlined in the respective writs, nomination of candidates will take place at the following locations:

With the Nomination Day now set, prospective candidates for the 2019 General Election are reminded to review sections 65 and 66 of the Virgin Islands Constitution Order 2007 that outline the qualifications and disqualifications, respectively for elected membership.

Section 66(f) states that no person shall be qualified to be elected as a member of the House of Assembly who “is a party to, or a partner in a firm or a director or manager of a company which is a party to, any contract with the Government of the Virgin Islands for or on account of the public service, and has not, within fourteen days before his or her nomination as a candidate for election, published in the Gazette or in a newspaper circulating in the Virgin Islands a notice setting out the nature of such contract and his or her interest, or the interest of such firm or company, in it.”

Candidates who choose to publish notices in the Gazette are hereby notified that the final day to submit the notice to the Cabinet Office for publication will be by 3:00 p.m. on Tuesday, February 12.

As the public education process continues for General Election 2019, His Excellency the Governor and the Supervisor of Elections, Ms. Juliette Penn will host a press conference on Monday, February 4 at 11:00 a.m. at Government House. The Governor will discuss his role beyond the issuance of the writ, while the Ms. Penn will discuss the procedures leading up to General Election 2019.

For further information persons should contact the Office of the Supervisor of Elections at telephone 468-4380 or 468-3701 extension 4380 between the hours of 8:30 a.m. and 4:30 p.m. The office is located on the ground floor of the Ulric Dawson Building, No. 6, Russell Hill Road, Road Town, Tortola.