Armistice Day Observed In The Territory With Brief Ceremony 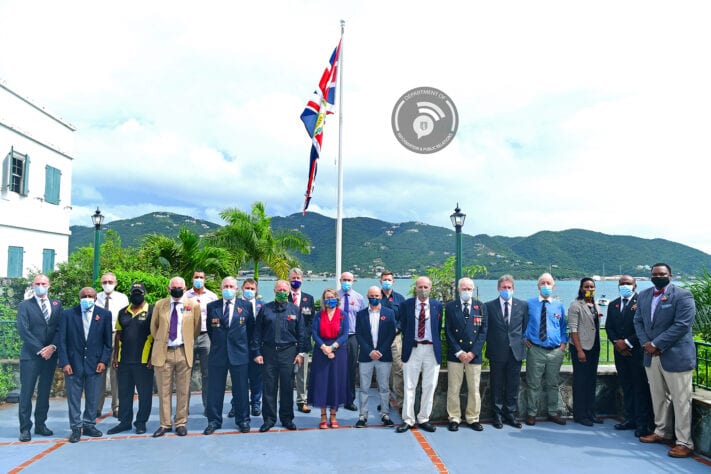 Approximately twenty-five veterans and supporters gathered for a brief ceremony at Government House today to mark Armistice Day in the Territory.

Veterans from different branches of the United Kingdom, Canada and United States armed forces attended the brief ceremony presided over by His Excellency the Governor, Augustus J. U. Jaspert.

Governor Jaspert said that even with limitations on social gatherings, it is important to honour members of the armed forces and in particular to remember those who have fallen in military conflict.

“We must never forget the horrors of military conflict,” Governor Jaspert stated, adding, “We owe deep gratitude to those men and women who sacrificed themselves for the freedoms that we enjoy today.”

Veteran Tim Dabbs read ‘The Act of Remembrance’, a poem that closes with the promise to honour those who perished during military conflict: “We will remember them.”

Andre Braithwaite played the bugle calls: Last Post and Reveille, and the ceremony closed with veteran Dennis McDonald reading the poem “In Flanders Field.” The poem, written by John McCrae in 1915, inspired the use of the poppy flower as a symbol for Armistice Day observances.

The first Armistice Day held in 1919 was marked throughout the British Commonwealth to commemorate the armistice, or agreement to stop fighting, that ended the First World War on Monday, November 11, 1918, at 11:00 a.m. Since then, it has become an annual tradition to observe a moment of silence on the eleventh hour of the eleventh day of the eleventh month.

Photo Caption: Veterans of various branches of United Kingdom, Canada and the United States armed forces posed for a photo with His Excellency the Governor,        Augustus Jaspert and Deputy Governor, David D. Archer Jr. after the Armistice Day ceremony.